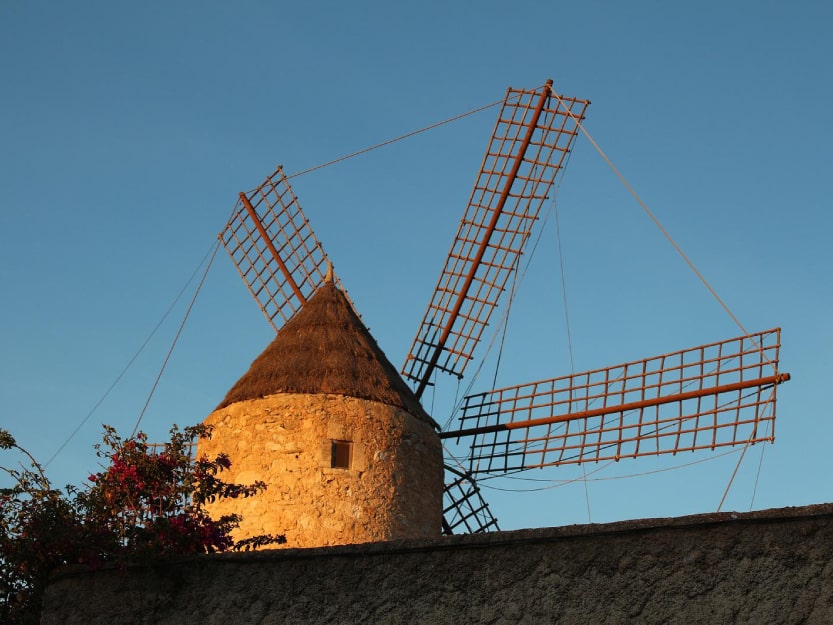 Discover the history and legends of the windmills in Mallorca

Windmills are a frequent element in the Mallorcan landscape. In fact, the island of Mallorca concentrates the largest number of windmills built in the whole Mediterranean, counting at least 3300, a number that can only be exceeded by the island of Crete. Some of them are in ruins, while others are perfectly preserved.

Why are there so many windmills in Mallorca?

The answer can be found in the power of the wind that blows over the Balearic Islands. This cold and turbulent wind, coming from the north and heading northeast, is known as the ‘Tramontana‘ and can reach up to 200 km/h, being this wind the one that gives its name to the mountain range known as Serra de Tramuntana.

Seeking to use the power of the wind, from 1845-1850 the Dutch engineer Paul Bouvij built the first windmill which, thanks to wooden blades, was able to harness the power of the wind and would be used to extract water during the draining of the existing swamp in the area now occupied by the Sant Jordi neighborhood in the city of Palma de Mallorca.

Since then, the tradition of using the force of the wind to simplify the life of the residents of the island would be established, collaborating in the pumping of water, grinding of grains or the manufacture of olive oil. A visit to the most emblematic windmills of the island is always included in the list of best activities to do in Mallorca.

Mallorca by car, routes to know the stories and legends of the windmills

Getting to know the most representative windmills of the island and understanding the history of each one of them, requires a visit to the interior villages in the center-south of Mallorca.

One of our most demanded experiences by car is: Windmills, Legends And Charming Villages, a Day Trip by car that will take you to discover spectacular secret places in Mallorca.

What will we see during the tour?

This tour by car covers a route of 60 kilometers, which are completed in a period of 5 hours, with the assistance of a guide who will narrate different stories and anecdotes related to each point of the route. During the route by car the visitor will be able to enjoy the visit to five charming villages with stops to taste the Mallorcan gastronomy.